The Cast Iron Griddle FAQ: Everything You Ever Wanted To Know

If you’ve recently ventured into the world of culinary arts, then you might have heard of this beauty known as a cast iron griddle. With its recent rise in popularity, you might have a couple of questions about this particular piece of cookware.

Before you purchase your very own, make sure to read our guide to get the answers to all your questions about the cast iron griddle and why you should have one.

RELATED: Kitchen Staples Every Good Cook Should Have In Their Fridge / Pantry

What Is a Cast Iron Griddle?

First of all, a griddle is simply a kind of cookware with a wide and flat cooking surface paired with low walls. These only-slightly raised edges are one of the key features of this particular cooking device.

The griddle’s shallow edges function to keep batter, oil, and other ingredients contained. On top of that, they also make it easy for the user to maneuver his or her utensils when flipping pancakes, searing steak, or toasting the perfect grilled cheese sandwiches for those family breakfasts.

Accordingly, a cast iron griddle is just one of many kinds of griddles that also has its own set of advantages for the clever cook. We’ll talk about this further in the sections to come.

In general, there are two kinds of griddles – griddle pans and griddle plates.

A cast iron griddle pan is typically square or rectangular in shape. They often have a width of about 10 or 12 inches.

On the other hand, cast iron griddle plates often have a circular or rectangular shape. With a larger width that ranges from 20 – 72 inches, this is the more popular option for larger groups of people.

One great example of this is the Camp Chef Reversible Pre-seasoned Cast Iron Griddle. With cooking surface dimensions of 16” x 24”, this cast iron griddle is more than ready to handle your cooking needs on your next camping trip or outdoor bbq with your family and friends. 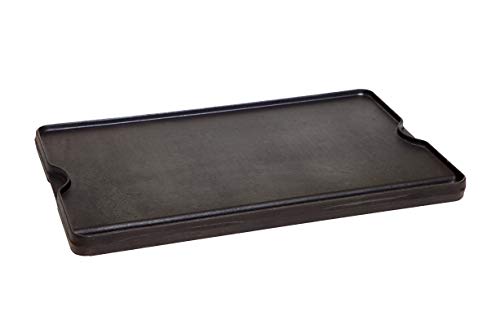 For the most part, however, the two are practically the same. The cast iron material gives the griddle a non-stick surface that is also ideal for pretty much any stove top, including induction, electric, and the more traditional gas stoves.

They also come in either raised or flat surfaces. The flat-surfaced griddle is ideal for cooking your typical breakfast dishes like a piece of sausage with some eggs, or a few pancakes for the entire group.

On the flip side, the griddle with a ribbed surface is the perfect option for grilling steaks and sandwiches, leaving those aesthetically-pleasing grill marks as your outdoor grills would do. Plus, they are great for draining any excess fat from food, which also makes them a healthier way of cooking.

What Are the Differences Between Cast Iron Griddles and Cast Iron Skillets?

In many ways and for most people, a griddle and a skillet are pretty much the same. The savvier homecook, however, knows that the two have a number of distinctions that can truly make a difference in his or her cooking.

Some of these differences are seen in the following:

Skillets have deeper cooking surfaces and inward-slanting walls. This design allows users to flip and turn their food before they plate it. They are ideal for frying and roasting food that do not need a large cooking surface area.

Griddles, on the other hand, have lower walls and larger surface areas. Their design makes them unideal for tossing food, but great for preparing them in large quantities.

Griddles are also perfect for frying and grilling both indoors and outdoors, while skillets are used mostly for frying indoors only.

Most griddles are large. As a result, they often come with handles on both sides for easier carrying, similar to the design of Brightalk Store’s Cast Iron Reversible Griddle. 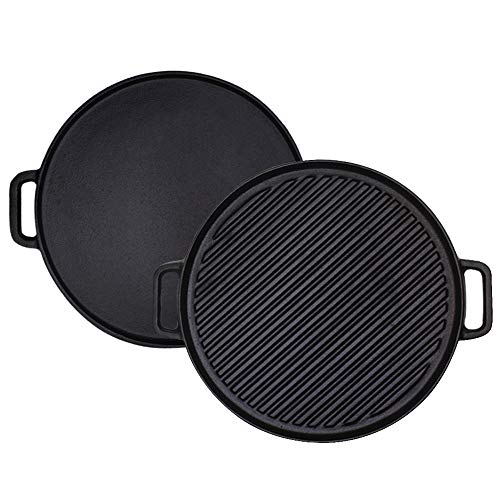 This griddle is equipped with  the less conventional circular design paired with double handles. Like most modern griddles, it is also reversible with one flat surface and another ribbed surface.

In contrast, their lightweight counterparts have no need for double handles. Skillets often come with a single straight handle that can be held at a distance while cooking.

In terms of the material they are made of, skillets are more diverse.

Most griddles are made of cast iron, whereas skillets are typically made from either aluminum, copper, cast iron, or stainless steel.

Perhaps the most overlooked difference between the two is how they deliver flavor. Most people believe that there is practically no difference; the clever cook, however, knows better.

Griddles are used mainly for cooking traditional BBQ foods like chicken, steak, hamburgers, and sausages. They grill food properly and leave that delicious, smoky flavor in the food.

Griddles also have excellent heat retention, making them ideal for cooking at high temperatures that improve taste without burning.

Skillets, on the other hand, are unable to reach those very high temperatures, making them unable to deliver that smoky flavor. They are more ideal for frying food like eggs, vegetables, and shrimp.

Keep in mind, however, that the skillet has a smaller surface area. If you’re planning on going camping with a big group of friends, carrying one griddle may be more ideal than having two skillets.

The ProSource Professional Heavy Duty Reversible Cast Iron Griddle may be the perfect griddle for the job. It is large enough to fit on two burners, making it the ideal companion for your next camping trip with the entire group. 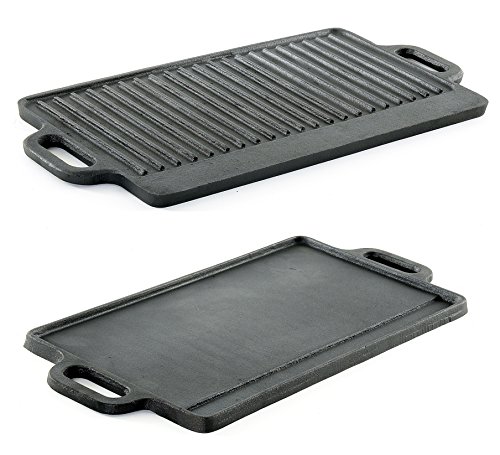 What Is a Cast iron Griddle Used For?

Griddles may bring up sweet memories of the scent of pancakes, bacon, and french toast reminiscent of those homemade brunch with friends and weekend breakfasts with the family. This extremely versatile cookware, however, has more benefits than just bringing up old memories.

Griddles are also great for making entrees like fish or steak which are often too big for a skillet. They are also perfect for roasting vegetables on the grill.

Some of the many advantages of using a cast iron griddle also include the following:

As was mentioned earlier, griddles, especially those with raised surfaces, are a great way of draining excess fat from the food as it cooks.

The Legend’s 2-in-1 Reversible Cast Iron Griddle is an excellent example of this. The 20”x10” reversible griddle is equipped with one smooth side and another that has a ribbed surface. 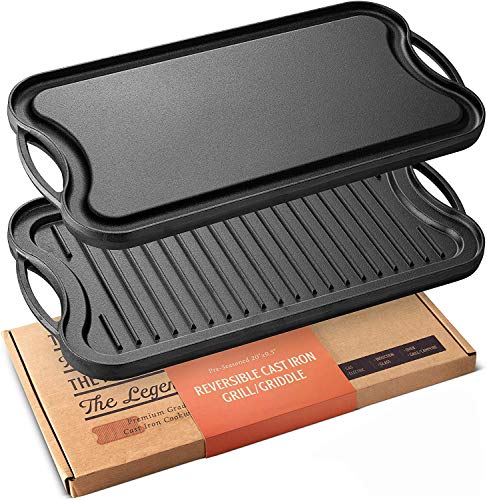 Plus, it also works with all heat sources including those from an oven or even a campfire.

Despite the technological advances in the field of iron cookware, the cast iron griddle still reigns supreme in the industry when it comes to durability. Not only is it known for being able to last for an entire lifetime, but it is also equipped to handle the abuse from metal utensils that other cookware are unable to.

Because of its ability to sustain high temperatures, a cast iron griddle is perfect for those who are planning to grill or even bake some goodies.

This ability allows users to sear chicken and steaks exceptionally well. It is also great for helping keep food warm for oven to table serving.

Gas, ceramic, halogen, electric, induction, and even campfire – you name it, the cast iron griddle can more than handle it.

RELATED: A Home Cook’s Guide To The Different Types Of Frying Pans

How Do You Cook on a Cast Iron Griddle?

Cooking on a cast iron griddle is pretty much the same with cooking on a grill or a cast-iron skillet. However, where this particular piece of appliance differs is in how one has to prepare it for use.

Unlike other cookware, a cast iron griddle has to be seasoned before use. This builds up a layer of polymerized fat that gives it that natural non-stick finish that only improves with continuous use.

To season your griddle, start by gradually pre-heating your cast iron griddle to medium heat. Once the temperature is achieved, spread a thin layer of oil across the entire surface for you to get an even sear.

Turn the flames off and let the griddle cool down a bit before you rinse it with warm to hot water. Make sure to avoid scrubbing it with soap, dishwasher, and other harsh cleaning chemicals as this will remove the layers of protection builty by seasoning it.

Once clean, dry your griddle with some paper towels and add a final layer of oil that will keep rust away.

You can also do away with all of these by choosing one that is already pre-seasoned, like the Backcountry Cast Iron Griddle. This American made griddle already comes pre-seasoned, so you can immediately use it right after you take it out of the box. 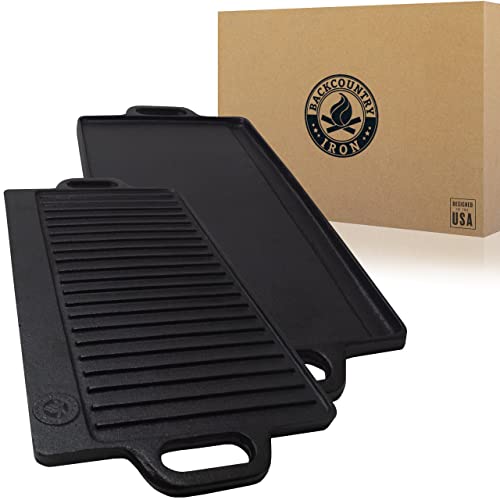 As with other cast iron griddles, however, make sure to still keep it away from harsh cleaning materials to avoid rust.

Is a Cast Iron Griddle Safe to Use?

Yes, cast iron griddles are perfectly safe to use. Like most cookware, however, necessary precautions have to be exercised when using them to avoid minor burns.

Keep in mind that cast iron griddles have very little sidewalls. As a result, grease may easily build up and overflow. Watch out for this and make sure to drain any leftover grease before you start putting more food on the griddle’s surface.

Furthermore, the cast iron griddle has excellent heat retention, which means that it can easily get very hot. If you need to touch or move the griddle while cooking, make sure to put on an oven mitt.

Alternatively, you can also go for the Lodge Cast Iron Griddle and Hot Handle Holder which is equipped with a more modern handle paired with a silicone handle holder that can protect the hands from temperatures of up to 450 degrees Fahrenheit. 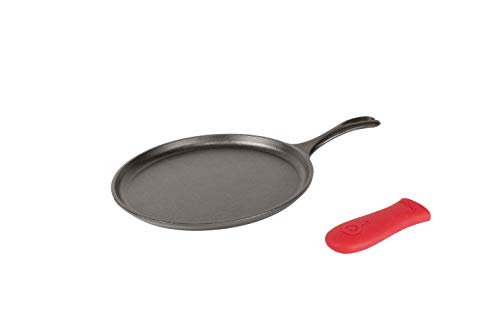 Is a Cast Iron Griddle Worth It?

With all these awesome features, yes, a cast iron griddle is definitely worth your money. It is a priceless piece of cooking equipment that can definitely take your dishes to the next level.

The best part of it is that it doesn’t cost a fortune to get one of your own. With the Lodge Pre-Seasoned Cast Iron Reversible Grill, for example, you definitely get a lot of bang for your buck. 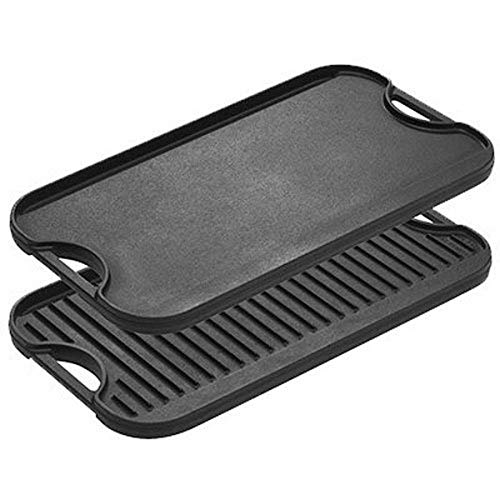 Not only do you get a griddle from one of the most renowned cookware manufacturers in the US, but you also get one that is versatile, affordable, and will definitely last you a lifetime.

A cast iron griddle is an essential part of any clever cook’s kitchen. Before making the decision to level up your cooking by buying one for yourself, make sure to read our guide so that all your questions about this beauty are answered.

Do you have other questions about the cast iron griddle? Ask them in the comments section below! 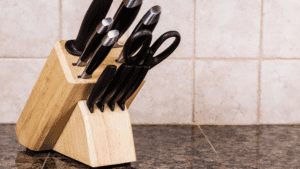 A Cuisinart knife set can handle any cooking task–from slicing to dicing to chopping and mincing–you name it! It can lighten your workload for meal 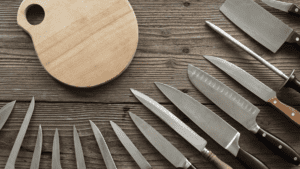 When it comes to kitchen knives, you can never go wrong with the classic, high-quality, world-renowned Victorinox kitchen knives. Whereas cheap and substandard knives dull 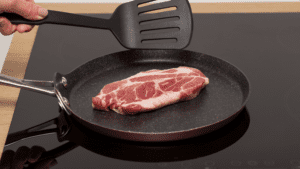 How to Cook a Steak on an Electric Hot Plate

You might think that an electric hot plate can only be used for easy cooking methods, such as making soup or reheating leftovers. But actually,

I am an amateur cook with 10 years of experience and I also love roasting coffee at home. This blog is to share my passion and have some fun in the kitchen!